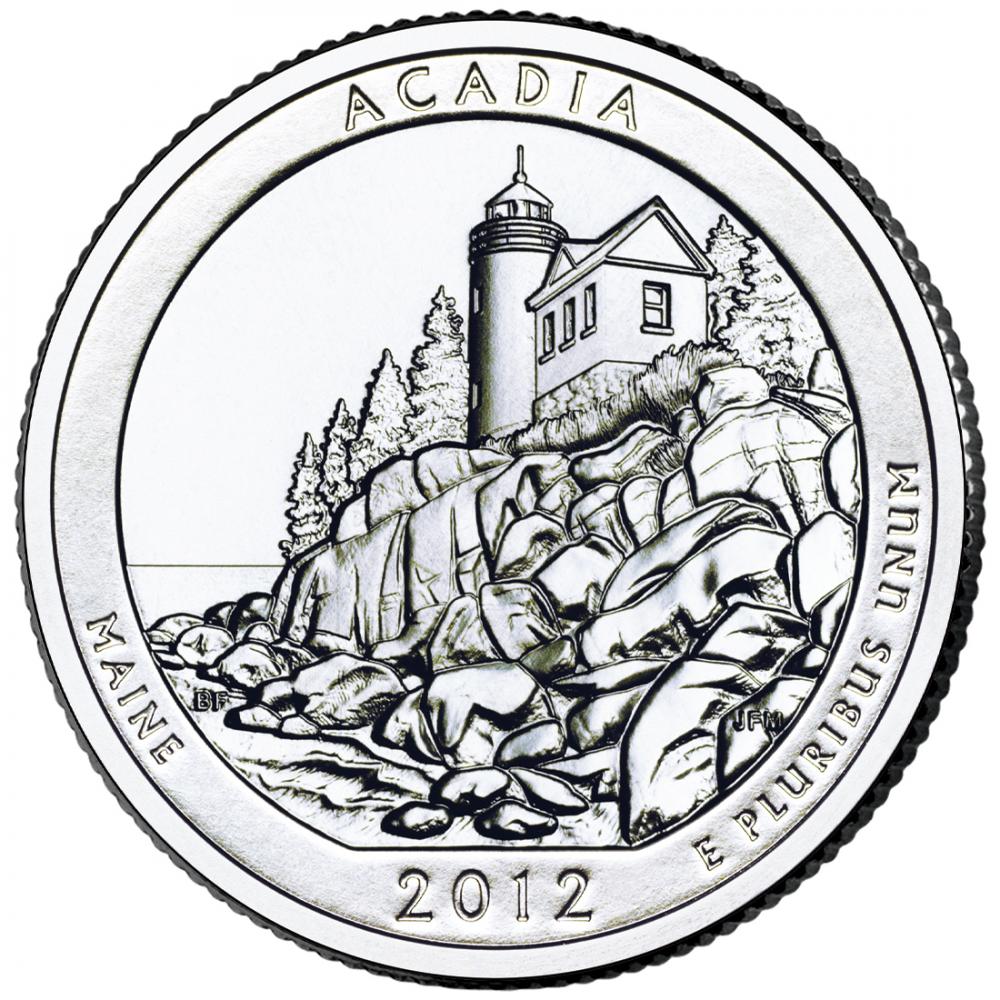 The 12-year “America the Beautiful” National Park quarter dollar program started in 2010, after the Statehood Quarters program concluded in 2008 and the District of Columbia and US Territories in 2009.The current National Park quarters program is currently slated to conclude in 2021 with the release of the final coin in the 56-coin program.The 56th coin will honor Tuskegee Airmen National Historic Site in Alabama.

When we think National Parks, we think forests, bodies of water, flowers and fields, birds and mammals, and wildlife in abundance: many of these quarters depict just that. However, out of the 45 that have been released thus far, nine have a building of some sort as part of the quarters design.

The first instance of a building on a National Park Quarter does not happen until the 3rd year of the series, on the 2012 Acadia National Park quarter.Located in Maine, it depicts the Bass Harbor Lighthouse.Acadia was the first National Park to be opened East of the Mississippi, and was mostly funded by John D. Rockefeller, American businessman, industrialist, and philanthropist. The lighthouse is not open with the exception of some occasional tours led by the local Tremont Historical Society, but the local grounds can be accessed by the public and viewed from the shoreline.

The next quarter to feature a building is the 2013 Fort McHenry quarter.Located in Maryland, it is a pentagonal bastion fort along the coast near Baltimore, and is well known for successfully defended itself from a British attack in the War of 1812.Popular among locals and tourists, it is known as the birthplace of our national anthem as Francis Scott Key wrote The Star Spangled Banner here in 1814.A design on the quarter incorporates fireworks, which represents their “Defenders Day, which is an annual celebration held there.The fort is open for tourists and is easily accessible by water taxi from the Baltimore Inner Harbor.

The 2014 Great Smoky Mountains is the next quarter to depict a building.Located in Tennessee, the log cabin portrayed on the quarter is actually found in Cable Mill, in the Cades Cove are of the park.The Great Smoky’s is the most visited national park and has a very diverse plant and animal life.As the park straddles North Carolina and Tennessee, it contains forests and fields with year-round blooming flowers, along with streams and rivers and even waterfalls.Animal wildlife is abundant, as this park is home to about 65 species of mammals, 200 varieties of birds, over 80 types of amphibians and reptiles, and over 67 native fish species.This park is open year-round weather permitting.

Our next quarter to offer a building is the 2015 Homestead National Monument of America, located in Gage County, Nebraska.This park was built to celebrate the passage of the Homestead Act of 1862, which ultimately transferred 270 million acres from public to private ownership.To qualify for a homestead, a person had to live on the property, cultivate, farm, and improve it.The cabin depicted on the quarter was built by George Palmer in 1867, and his wife and 10 children resided there.The design elements of the quarter represent the 3 fundamentals of survival needed by the homesteaders, that being food, shelter, and water.

Next up is the 2016 Harpers Ferry quarter.Located in West Virginia where the Potomac and Shenandoah Rivers meet, the Harpers Ferry National Historic Park is home to John Browns Fort, which is the building shown on the quarter.Built in 1799 as an armory and an arsenal which built most of the small arms for the US Army, it was in 1859 that John Brown, an abolitionist, led a raid of 21 men (5 of whom were black) on the arsenal hoping to secure the weapons and help the slaves start a revolt in the south.Nearby troops, led by US Army Lt. Colonel Robert E. Lee, after unsuccessful negotiations, stormed the building and captured Mr. Brown, who was later tried for treason, convicted, and hanged.It is open during park hours for touring.

In 2017, three of the five quarters depicted a building.The first is the 2017 Frederick Douglass National Historic Site in Washington D.C, and displays the home of the famous runaway slave, abolitionist, equal rights advocate and statesman.Located in the Anacostia neighborhood of Southeast Washington D.C. and named Cedar Hill, Mr. Douglass lived in this home from 1877 till his death in 1895.The hilltop home offers a view of the US Capitol and the D.C. skyline.It is here where he wrote his autobiographical book, Life and Times of Frederick Douglass, published in 1881 and reissued 10 years later.A guided tour is the only way to gain entrance.Park rangers lead daily tours at scheduled times.

Next is the 2017 Ozark National Scenic Riverways located in Missouri.This park is home to two well-known floating rivers, the Current, and Jacks Fork.Spring fed and clear, many people canoe, boat, swim and fish these rivers.The park is also home to hundreds of freshwater springs and caves.It is Alley Mill, however that is on the quarter. Built in 1894, it is a steel roller mill that converted wheat into flour, and to this day, much of the original equipment is still there.Alley Mill is open seasonally from May 25th to October 31st, with programs at the top of each hour

The final 2017 quarter with a building is the Ellis Island National Monument in New Jersey.Most commonly known as the Statue of Liberty, the building on the quarter is the hospital, and was the United States first public health hospital, opening in 1902 and operating until 1930. In the foreground of the quarter, an immigrant family is shown. Ellis Island is open year-round, except December 25th, from 9:30 am to 3:30 pm.

The last quarter thus far to depict a building is the 2018 Block Island National Wildlife Refuge, which will be released on November 13, 2018.Located in Rhode Island, the building shown is the North Light Lighthouse.Although the park was created in 1973, the lighthouse was first lighted in 1868.The lighthouse is shown in the background as a black-crowned night-heron flies from the Cow Cove beach towards Sandy Point.The island is well-known as a major migratory bird habitat, and attracts hundreds of “birders” each Fall to visit. The park is open year-round from dawn to dusk.

For the year 2019, only one quarter will depict a building, that being the Lowell National Historic Park in Massachusetts, and it depicts a mill girl working a loom with the Boot Mill Tower in the background.This design integrates together all the key elements of the human story involved with the industrial revolution, its legacies, technological innovations, and the industrial cityscape, all conveying the stories and themes of Lowell National Historical Park.This park is open daily from 10am to 5pm.

Just like the previous year, 2020 only brings us one quarter with a building design.The Weir Farm National Historic Site located in Connecticut, has a quarter design that depicts an artist, actively painting just outside the studio of Julian Alden Weir.This design is inspired by many of Weirs paintings that were created on the property.The park is open Wednesday through Sunday from 10am to 4pm

The last quarter to depict a building is also the last quarter that completes the series, and that is the 2021 Tuskegee Airmen National Historic Site.Located in Alabama, this quarter design depicts two P-51 Mustang aircraft flying above as a pilot suits up to join the effort.The Moton Field control tower and adjacent terminal is seen in the background.“Tuskegee Airmen” was comprised of both men and women of diverse nationalities, and was staffed by nearly 1,000 pilots and more than 15,000 support staff, such as navigators and mechanics.This park is only open Friday and Saturday from 9am to 4:30pm.

With the ending of the National Park “America The Beautiful” Quarter Series, the design then changed to one depicting George Washington crossing the Delaware River, which will be a 1-year only design, as 2022 brings us a whole new series, one that offers designs dedicated to historic American women and their achievements.