Recently while at a coin show at a corner table, I noticed the dealer had quite a large bin of loose world coins. I always stop when I see these types of offerings and look to get a few from my birth year, as my goal is to get one from every country. While sifting through these coins, I was amazed to see so many compositions. There was copper, brass, bi-metallics from Europe and Mexico, aluminum, nickel, and other various clad issues. It made me think… How many compositions has the United States Mint used in its coinage, and if I created a set with one example of each composition, how many coins would complete this “set”? The answer is 21. 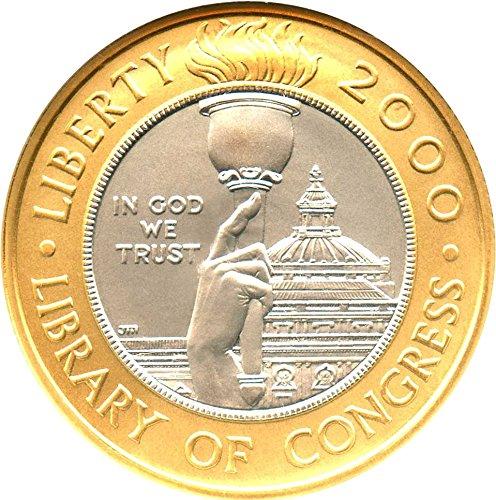 The half-cents and large cents from 1793 through 1837 were made of pure copper, basically the copper as pure as it could be after the smelting process, and not having any additional metals added. Starting in 1837 through the end of both series, the composition was bronze, made of 95% copper and 5% tin and zinc. Starting with the Flying Eagle small cent, the composition was 88% copper and 12% nickel, a copper-nickel composition, frequently referred to as CN, that gave the coins a lighter look in color.

The next composition change occurred in 1982, another transition year, as 1982 cents will either be the bronze composition or the new copper-plated zinc version, which was made of 97.5% zinc and 2.5% copper. This is currently the composition of today’s cent and probably will be until Congress either changes the composition again or just eliminates the cent, as it currently cost the US Mint 1.7 cents to make a cent!

To recap the five different copper compositions, they are:

Moving onto silver coins, there were actually six different silver compositions that the Mint has used. The first silver composition to be used by the Mint was 89.24% silver and 10.76% copper. This was used in our Flowing Hair, Draped Bust, and Capped Bust coinage, on the half-dimes, dimes, quarters, halves, and the Draped Bust dollar. This composition started in 1794 and ended in 1837.

The next silver composition to be used was the 90% silver, interestingly first seen on the 1794 and 1795 Flowing Hair dollars, whereas the following issue, the Draped Bust dollar was of the previously mentioned 89.24% silver. This 90% silver & 10% copper composition was primarily used for most of our silver coinage, from the Seated Liberty design onward, for our half-dimes, dimes, 20-cent pieces, quarters, halves, and dollars until the year 1964. The short-lived three-cent silver coin brings us to our third silver composition, which was 75% silver and 25% copper, but only for the first three years of issue, 1851 through 1853. The coin was made from a 90% silver composition from 1854 to 1873.

The remaining three silver compositions didn’t come into existence until the mid 20th century. The fourth silver composition was found on Jefferson nickels struck from 1942 through 1945, which carry a large mintmark above the dome to denote its new silver composition and was made of 35% silver, 56% copper, and 9% manganese. These nickels were made of this new composition, as nickel was a critical metal needed for World War II.

Our fifth silver composition was found in our Kennedy halves dated 1965 through 1970 (and then again on the 1976 Bicentennial half). This silver composition is referred to as 40% silver clad, and is technically made of outer layers of 80% silver and 20% copper bonded to an inner core of 20.9% silver, giving the coin an overall composition of 40% silver and 60% copper. This reduced silver composition was also found on the collector’s version of Eisenhower dollars issued from 1971 through 1974 (the Blue Ikes and the Brown Ikes, issued as uncirculated and proof, respectively), and the collectors’ versions of the 1976 Bicentennial quarter.

Our sixth silver composition is the 99.9% silver American Eagle 1-ounce bullion coin. As it is monetized by the U.S, Mint and has a denomination of one dollar, it is indeed a coin, but worth much more for its silver value than its face value.

To recap the six different silver compositions, they are:

To recap the four different gold compositions, they are: 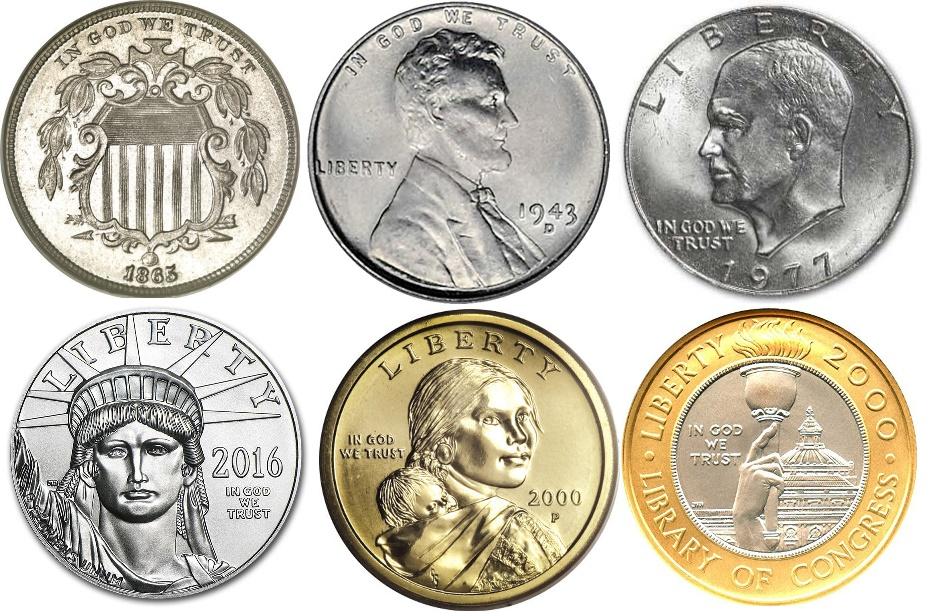 Coins of Other Compositions

We have now looked at 15 different metallic compositions. The remaining six compositions didn’t hit the scene until the 20th century, except for the nickel composition, which was first seen on the three-cent nickel coins from 1865 to 1889. The next nickel composition coin was the Shield nickel, which started the following year in 1866. This nickel composition is formed of 75% copper and 25% nickel, and has remained this way even to today’s five-cent coin.

The next composition to be seen was in 1943 on the Lincoln cent. Like the Jefferson nickel’s composition changed for World War II, so did the Lincoln cent, but only for one year. Sometimes referred to as the “silver penny,” there is no silver in it. The 1943 cent is comprised of 99% steel with a thin layer of zinc, but most commonly known as zinc-coated steel. With the passing of the Coinage Act of 1965, silver was removed from our dimes and quarters, and reduced in the half-dollar. This Act created two new compositions from the US Mint. Our dimes and quarters are now made of a cupro-nickel composition that is 75% copper and 25% nickel that is bonded to an inner core of pure copper. The other composition was the 40% silver already mentioned.

The next newest composition to be seen is platinum, found on the American Eagle platinum bullion coins which were first issued in 1997. This platinum coin series is made of 99.95% platinum, and as a side note, unlike its cousin the American Gold Eagle Bullion series, the reverse design changes yearly. The next composition to appear isn’t until the beginning of the 21st century, the year 2000 actually.

With the issuance of the new Sacagawea dollar, the United States Dollar Coin Act of 1997 mandated that it have a plain edge and a different composition to distinguish it from the Susan B. Anthony dollar, because the public was confused with it as the Susan B. Anthony dollar was similar to size and appearance of the Washington quarter. This new composition gave the coin a “golden” color, but, just like the 1943 cent, contains no precious metal! This new modern dollar coin is made of 88.5% copper, 6% zinc, 3.5% manganese, and 2% nickel.

The last composition has actually been seen before separately, but not together, and that is on the 2000-W $10 Library of Congress commemorative bimetallic coin. This gold and platinum coin is the first bimetallic piece to be issued by the U.S. Mint and was struck in both business strike and proof quality. This coin is comprised of 48% gold, 48% platinum, and 4% other alloy.

To recap the remaining six compositions, they are:

For one to put together a set of one each of these 21 different compositions would be pretty easy to do, with the majority of the coins being easy to procure from your own current collection or from a local coin dealer or coin show. The exception being the 2000-W gold/platinum bi-metallic coin, which carries a good premium over the melt value. The U.S. Mint has struck coins out of other compositions, but they were patterns and trial pieces, such as the 1974 aluminum cent, and not struck for everyday use. Should you decide to put together a set based on the composition, I wish you good luck and fun in your search!